Features coming to PS4 with “Yukimura” include:

We’re excited for you to get your hands on these new features and experience them for yourselves. You have all been such a big part of our successes, and we have carefully listened to your requests to make your PlayStation experiences even better. We’re happy to be delivering many of them with “Yukimura.” Please keep the feedback flowing, so we can continue making PlayStation 4 the best place to play.

*Suspend/Resume is not fully supported by some software titles.
**A sufficiently robust wi-fi connection is required.

Here are some of the highlights from this weeks new PS4 Games, check out the link below for all the releases for PS4, PS3, and VITA titles.

I’ll be streaming Bloodborne for the next hour come by and say HI!

Psst.. Bloodborne is out tonight! And if you know anything about From Software, you know they don’t make cakewalks. To give you a head start, PlayStation’s internal teams joined forces to provide a list of crucial tips. Enjoy, and leave your advice in the comments below!

Choose carefully. Spend time selecting your “Origin” during character customization.
Selecting the one that fits your play style will save you time and Blood Echoes in the long run.
–Julie Abdalla, SCEA Test Analyst

Stats 101. Vitality grants more health and is always helpful. Endurance and Strength are good bets if you want to maximize your melee, while Bloodtinge boosts the effectiveness of your firearms. Whichever play style you prefer, pick a few key stats and pump them. Don’t spread yourself thin!

Blood money. Blood Echoes are your sole form of currency, both for purchasing items and leveling up. If you die (and you will), you’ll lose them… but if you can get back to your body without dying again, you can reclaim them. Look for a puddle on the ground or an enemy with glowing eyes.

Dress to kill. As soon as possible, save up Blood Echoes to buy the Yharnam attire from the shop in Hunter’s Dream. This new garb will greatly increase your defense and help keep you breathing early in the game. 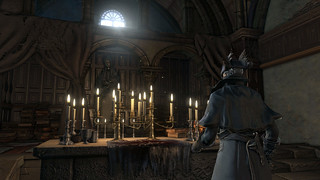 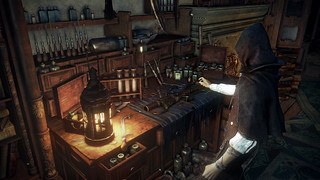 Invest for success. Use Blood Stone Shards to “reinforce” (aka upgrade) a weapon’s damage. You can do this in the workshop located in Hunter’s Dream. Once you’ve chosen a good melee weapon, reinforce it as much as possible as early as you can. The extra damage will make your life so much easier.

You are the weapon. It’s best to stick with one weapon and learn its intricacies — how far it reaches, how long it takes to swing, which buttons yield the best attacks. For example, the Kirkhammer starts as a humble sword, but tap L1 and it transforms into a mighty hammer that can eradicate mobs of beasts with one swing.
– Justin Massongill, PlayStation.Blog

Smart shopping. Quicksilver Bullets are hugely overpriced in Hunter’s Dream, so make runs through Central Yharnam and scoop them off the snipers instead. Save your Blood Echoes for Molotovs and other, more exotic purchases.

Insightful mind. Your Insight level is shown in the upper right-hand corner of the screen under your Blood Echoes. It indicates the depth of inhuman knowledge you have attained, and you can spend a point to call in other players for help. Pay close attention to your Insight level — things around you may change as it increases…
– Kumi Yuasa, SCEA Bloodborne Producer 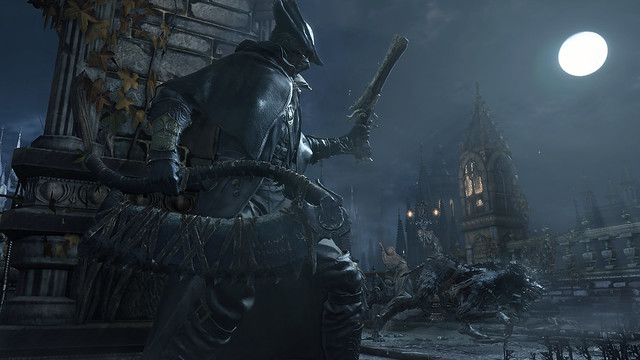 The best defense. Bloodborne rewards a smart offense. After you take damage, for a few seconds you can regain lost health by landing blows on enemies. In tough combat scenarios, it may pay to launch into a berserker rage and earn back every possible drop of life.

Lock and load. You can click R3 to lock onto a foe, and you’ll circle strafe around it. You’ll need to lock on to throw items or fire projectiles. Locking on isn’t always the best choice, though. When fighting multiple foes or certain bosses, you may want to preserve your freedom of movement. Generally, it’s best to lock on when you’re facing one tough enemy, such as a Wolf Beast or Brick Troll.

Gun stunner. Bloodborne’s firearms inflict little direct damage. Instead, use them to stun enemies and set up devastating Visceral Strikes. Lock on to an enemy (click R3) and press L2 to fire. A well-timed shot, landed just as the enemy is attacking, will briefly stun it. Then, at close range, quickly tap R1 to inflict a deadly Visceral Strike. This will kill most beasts in just one hit, and even works against many bosses. Practice this and you’ll be unstoppable.

Free ammo. Heading into a crucial battle and need Quicksilver Bullets? No worries. Tap Up on the directional pad and, at the cost of a little life, you’ll snag five free rounds. If you’re quick, you can even regain that lost life by slashing at a nearby foe.
– Justin Massongill, PlayStation.Blog

Drink up. Blood Vials are quite common in Yharnam, so don’t skimp on healing. Tap Triangle whenever you’re not at maximum health — yes, even during a fight. 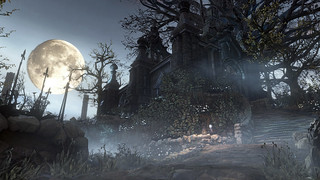 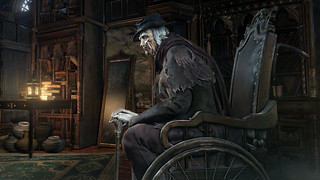 Meet the Molotov. Early on, Molotovs will be your best friend. They’re affordable, inflict significant damage, and will allow you to defeat enemies that are much tougher than you. Combine them with the Oil Urns to inflict grave damage.

Hit and run. The lunging attack (Up on the left analog stick and R2, simultaneously) is a powerful move you’ll want to use again and again. Use it to land the first strike on a dangerous enemy or to deliver a final blow from afar.

Wear and tear. Inflicting less melee damage than normal? Your weapon is probably in disrepair. Keep your weapons in tip-top shape by visiting the workshop in Hunter’s Dream.

Flame on. The torch illuminates dark spaces, and can inflict decent damage up close. But when equipped, it will also keep certain, dangerous enemy types at bay. It’s a useful tool for any Hunter.

Trap ‘em. Try to lure large enemies into smaller pathways where they cannot easily get through, and then perform thrusting attacks to kill them from relative safety.
– Brandon Buchholtz, SCEA Test Analyst

Build a combo. Hops and rolls count as a “move” in a combo. Try dodge rolling and following that up with L1 or R1. You’ll attack in a unique way.
– Brian Dunn, SCEA Brand Marketing 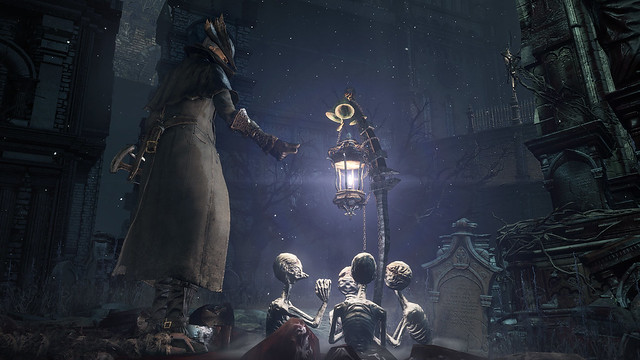 Fear the wolves. Wolf Beasts spell trouble. You’ll first encounter a pair of them on the Great Bridge in Yharnam en route to the Cleric Beast. Throw a Pebble to lure one out, then fight it one-on-one, being mindful to hop backwards before it attacks. If that doesn’t work, melt ‘em with Molotovs.

Troll the Trolls. A Brick Troll can be a handful. Early in the game, don’t mess around: Toss two Molotovs and be on your way. If you don’t have that luxury, use lock on (click R3) and work your way around to its backside. Land a blow or two, then get out of the way. Wash, rinse, repeat.

Stone’s throw. In Central Yharnam, the Hunter mobs crowded around the fire pit can easily overwhelm you. Throw a Pebble to lure one away and deal with him Mano y mano.
– Brandon Buchholtz, SCEA Test Analyst

Cut corners. Explore the environment to find secret paths and routes, and be sure to unlock doors and gates to create shortcuts. When you need to return later to pick up your dropped Blood Echoes, shortcuts may be a big time saver!
– Kumi Yuasa, SCEA Bloodborne Producer

Watch the windows. Keep an eye out for illuminated lanterns near doors or windows. These signify that you can interact with an NPC inside. Some of these NPCs will issue side quests.
– Tommy Garry and Colin Fannon, SCEA Test Analysts

Bloodborne reviews are in. How does From Software’s latest stack up against its progenitors?

Moreover, it has to keep the diabolical Miyazaki amused, so that means Bloodborne is even more full of tricks and challenges than the Souls games.

In the meantime though, let’s see what reviewers though of it.

via Bloodborne reviews – all the scores in one place | VG247.

Bloodborne is the latest Action RPG from renowned Japanese developer FromSoftware, in collaboration with SCE Japan Studio, available exclusively for the PlayStation 4 system and available this Tuesday March 24th.

via Bloodborne – Cut You Down Trailer | The Hunt Begins | PS4 – YouTube.

via God of War III Remastered Coming to PS4 on July 14th.

According to the game’s creative director Uncharted 4 has been delayed into 2016. The game was originally slated for 2015 though a date was never announced. Find more info on the delay here: Sony Blog

Twitch CEO, Emmett Shear has confirmed that Twitch will in fact be bought by Amazon. Rumors earlier this year had Google, or Youtube actually, buying the huge video-game streaming service. But today we have confirmation that Amazon will be purchasing them.

In a an open letter, the CEO states that Twitch will remain seperate, but that now with Amazon’s resources, they aim to give us a better Twitch experience. A Copy of the letter is below

It’s almost unbelievable that slightly more than 3 years ago, Twitch didn’t exist. The moment we launched, we knew we had stumbled across something special. But what followed surprised us as much as anyone else, and the impact it’s had on both the community and us has been truly profound.

Your talent, your passion, your dedication to gaming, your memes, your brilliance – these have made Twitch what it is today. Every day, we strive to live up to the standard set by you, the community. We want to create the very best place to share your gaming and life online, and that mission continues to guide us.

Together with you, we’ve found new ways of connecting developers and publishers with their fans. We’ve created a whole new kind of career that lets people make a living sharing their love of games. We’ve brought billions of hours of entertainment, laughter, joy and the occasional ragequit. I think we can all call that a pretty good start.

Today, I’m pleased to announce we’ve been acquired by Amazon. We chose Amazon because they believe in our community, they share our values and long-term vision, and they want to help us get there faster. We’re keeping most everything the same: our office, our employees, our brand, and most importantly our independence. But with Amazon’s support we’ll have the resources to bring you an even better Twitch.

I personally want to thank you, each and every member of the Twitch community, for what you’ve created. Thank you for putting your faith in us. Thank you for sticking with us through growing pains and stumbles. Thank you for bringing your very best to us and sharing it with the world. Thank you, from a group of gamers who never dreamed they’d get to help shape the face of the industry that we love so much.

It’s dangerous to go alone. On behalf of myself and everyone else at Twitch, thank you for coming with us.

I haven’t really had a chance to process this newest development, but as of right now I suppose if they leave Twitch to be twitch still and only help the service become better, then that is a great thing. Of course whenever there is a deal like this, the concern is that they will in fact mess it all up. So here is hoping that in this case, things only get better.